Americans for Free Speech Parade and Protest against manner in which invitation to Narendra Modi was withdrawn from Wharton India Economic Forum by University of Pennsylvania based on petition by three professors. (Press Release below)


NOTE: The protest will be at same venue (outside), date and time as Wharton India Economic Forum meeting.

This protest is organized by Americans For Free Speech with members drawn from Indian American community, Wharton and U Penn faculty, Alumni, as well as mainstream American Community who are concerned with violation of free speech in our learning centers and are distressed with continued false propaganda against Narendra Modi by leftist extremists on campuses. 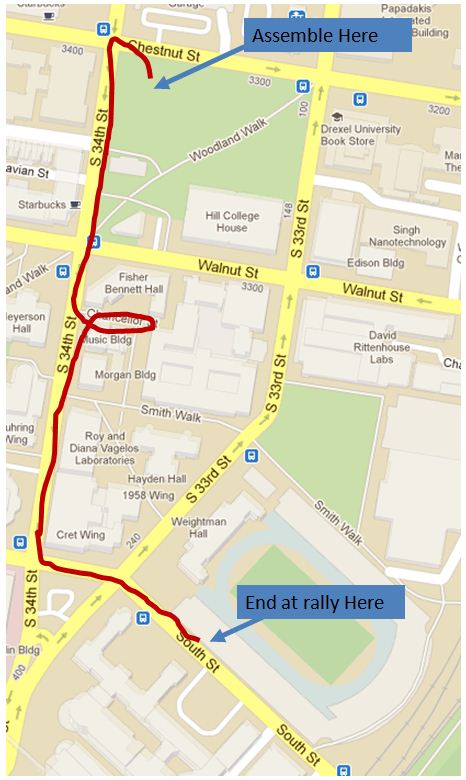 Americans for Free Speech (AFS) is conducting a Parade followed by Demonstration at the University of Pennsylvania campus on Saturday March 23  on the occasion of Wharton India Economic Forum meeting. The Parade starts at the 34th Street and Chestnut Street from 11:30 AM.  The demonstration is from 12 to 2:30 PM EST in front of Penn Museum (30th Street and South Street). The demonstration is against the Wharton India Economic Forum (WIEF) summary dis-invitation of Mr. Narendra Modi after having extended him a formal invitation to be the keynote speaker.

The program will consist of a parade followed by a rally where prominent people are expected to speak. The parade will start at the intersection of 34th and Chestnut Streets and proceed on 34th street to the venue of the rally. It will briefly halt at the entrance of the Department of English to hold a memorial for free-speech rights. The rally will be held just outside the venue of the Wharton India Economic Forum when their event is in progress.  Buses have been arranged from Edison, NJ, Jersey City, NJ and Queens, NY.   We request protest attendees to register at our website http://WhartonProtest.blogspot.com so that we can arrange for more buses if needed.  Congressmen,representatives of civil rights groups and free-speech advocates will be speaking at the protest.

AFFS consists of people who came together in response to the intimidation of students by the faculty at the University of Pennsylvania.  It represents free-speech advocates, Wharton (and U Penn) alumni,  U Penn faculty, and and members of civil rights groups who believe that Wharton did injustice to its own stated principles of Freedom of Speech, the principles on which this country is built upon. The action by the university's faculty members was also an insult to Hindus who were denied their basic rights.  It is distressing to note that a few anti-Hindu activist professors have  engaged in false propaganda and have hijacked the narrative in American institutions.  The activists who repeatedly make cooked up assertions of human rights abuses against anyone who does not believe in the extreme leftist ideology end up abusing the human rights of whom they target.  In this particular case, the speaker, Narendra Modi, was not only an unfair target of dishonest faculty members, but is also someone who made his state a showcase of the development India can achieve if it has a principled and capable leader.  (Please see our website on http://whartonprotest.blogspot.com for the various lies being propagated against Hindus).

We request members of the UPenn community and the general public to support this activity. If you are not in NY/NJ/PA area, please inform your friends and relatives in this area and urge them to participate in the protest.

For further information email can be send to whartonprotest@gmail.com or call (732) 723-8332.
Call
Send SMS
Add to Skype
You'll need Skype CreditFree via Skype
Posted by Wharton Protest for Free Speech at 1:58 PM 4 comments: